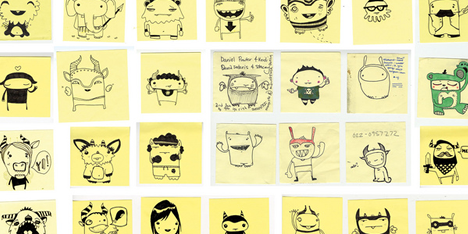 A thought occurred to me as I stared at the Post-it notes on my desk: why are they yellow? I turned to Google, but could find no answer on the web. On the off-chance, I decided to ask 3M – inventors of the Post-it – via Twitter.

After much effort on their part, I received a detailed response via email, which included a transcription of an interview that had been conducted to specifically answer my question:

TRANSCRIPT OF DISCUSSION BETWEEN HUGH MURPHY (BUSINESS MANAGER, E-CHANNELS) AND DR GEOFF NICHOLSON (RETIRED, FORMER VICE PRESIDENT TECHNICAL OPERATIONS), 3M RESEARCH & DEVELOPMENT
(23rd February 2010)
HM: Why were Post-it Notes originally yellow?
GN: “Great question – fantastic question. “
“Guess what – we were in the labs and if you imagine, this is my lab here, and then there’s a corridor, and then there’s another lab. They happened to have some scrap yellow paper – laughs – it’s absolutely true. “
“Now afterwards we had a lot of people who said well it’s got a good emotional connection or…” (pauses) “that’s a load of … whatever.”
“They had some scrap yellow paper – that’s why they were yellow; and when we went back and said ‘hey guys, you got any more scrap yellow paper?’ they said ‘you want any more go buy it yourself’, and that’s what we did, and that’s why they were yellow.”
“To me it was another one of those incredible accidents. It was not thought out; nobody said they’d better be yellow rather than white because they would blend in – it was a pure accident.”
“Just like the adhesive was a pure accident. They are the best kinds of accidents to have, but you have to recognise it – which we did.”
HM: “So who actually invented the Post-it note?”
GN: “There were three people. Spence Silver invented the adhesive by accident. He was trying to make – he was in the business of trying to make stronger better adhesives to stick aeroplanes together –  and we do stick aeroplanes together.”
“He came to my office about 48 hours after I joined the commercial tapes division from the overhead projectors part of the business.”
“I’d been made the new products laboratory manager, and they hadn’t had any new products in about 15 years. They hadn’t had a new product since magic tape, and magic tape was about 15 years old.”
“So he knocked on my door. There were two guys – Spence Silver and another guy called Bob Oliveira. They had discovered this adhesive in 1968 – that’s when the patent was filed – and here we are five years later in 1973.”
“He’s saying ‘Geoff would you be interested in this adhesive?’ And I said yes. Why? Because I’m naïve – I’m naïve about adhesives. I don’t know much about it. And I also believe a certain naivety is important. He asked me if I was interested.”
“He had been trying for 5 years to get any business unit interested in this adhesive so he gave me samples and we started playing with things and we started making bulletin boards. “
“As we were making bulletin boards, and tapes and things like that, another guy who worked for me was Art Fry. He was making tapes for skis – ski tape – things like book arranging tape- Things that you’d put on a bookshelf and it would hold books in place”.
“And he said ‘why are you putting the adhesive on a bulletin board. Why don’t you put it on a piece of paper and then we can stick it to anything.’”
“You know – and that was the three of us that came good. And I was in a management role primarily to defend and go fighting for it”.
“When you get down to it with innovation – a lot of people are required to make it successful. Marketing sales, even the accountants.”
“But you sometimes have to fight for it – and that’s inevitable in something that changes the basis of competition. People resist change.”

So there you have it. Not just a fascinating piece of history, but evidence of a company that are willing to go above-and-beyond for no immediate profit or benefit to themselves. 3M (and Hugh in particular), you rock.