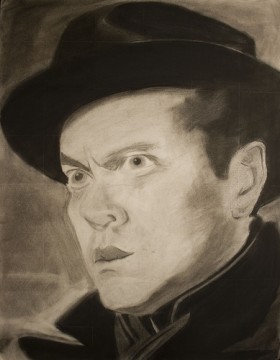 Orson Welles was best known for his work as an American film director and actor – Citizen Kane being his pivotal career piece, which he co-wrote, produced, directed and starred in.

In 1955 Welles did a series for the BBC called Sketchbook where in six, 15 minute shows he drew in a sketchbook “to illustrate his reminiscences for the camera … [he] served as host and interviewer, his commentary including documentary facts and his own personal observations.” Perhaps most interesting to the contemporary viewer, weren’t his memories of movie stars and film making, but rather his very modern and apt observations about privacy, the passport and personal rights.

I wonder why it is that so many of us look like criminals in a police lineup when we have our pictures taken for a passport. I suppose it’s the unconscious foreknowledge of the scrutiny to which our likeness will be subjected that gives us that hangdog, guilty look. Really, theoretically, a passport is supposed to be issued for our protection. But on how many frontiers in how many countries I’ve handed over my passport with all the emotions of an apprentice forger trying to fob off a five pound note on the Bank of England. Guilty conscience, I suppose … Think of all of those forms we have to fill out, for example, you know what I mean, by police forms, we get them in hotels, on frontiers, in every country all over the world we’re asked, state your sex, male or female, for example. Well obviously, I’m a male, I’m a man, why should I have to answer that? State your race and religion in block letters; well, now why should I have to confide my religion to the police? Frankly, I don’t think anybody’s race is anybody’s business. I’m willing to admit that the policeman has a difficult job, a very hard job, but it’s the essence of our society that the policeman’s job should be hard. He’s there to protect, protect the free citizen, not to chase criminals, that’s an incidental part of his job. The free citizen is always more of a nuisance to the policeman that the criminal. He knows what to do about the criminal …

I’d like it very much if somebody would make a great big international organization for the protection of the individual. That way, there could be offices at every frontier. And whenever we’re presented with something unpleasant, that we don’t want to fill one of these idiotic questionnaires, we could say “Oh no, I’m sorry, it’s against the rules of our organization to fill out that questionnaire.” And they’d say “Ah, but it’s the regulations,” and we’d say, “Very well, see our lawyer,” because if there were enough of us, our dues would pay for the best lawyers in all the countries of the world. And we could bring to court these invasions of our privacy, and test them under law. It would nice to have that sort of organization, be nice to have that sort of card. I see the card as fitting into the passport, a little larger than the passport, with a border around it, in bright colors, so that it would catch the eye of the police. And they’d know who they were dealing with … The card itself should look rather like a union card, I should think, a card of an automobile club. And since its purpose is to impress and control officialdom, well, obviously, it should be as official looking as possible. With a lot of seals and things like that on it. And it might read something as follows:

This is to certify that the bearer is a member of the human race. All relevant information is to be found in his passport. And except when there is good reason for suspecting him of some crime, he will refuse to submit to police interrogation, on the grounds that any such interrogation is an intolerable nuisance. And life being as short as it is, a waste of time. Any infringement on his privacy, or interference with his liberty, any assault, however petty, against his dignity as a human being, will be rigorously prosecuted by the undersigned …

Read the entire transcript here or, better yet, if you are in the UK, you can watch it on BBC iPlayer.