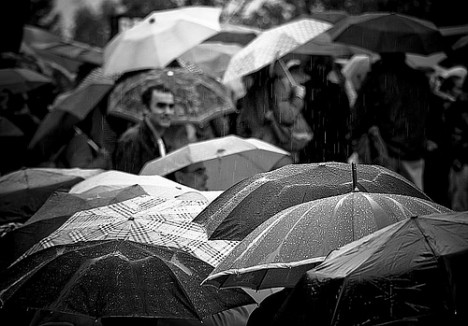 Statistics vary slightly, but most weather sites agree that the median number of rain days in London, UK sits somewhere between 140 and 150 days annually. This translates into big business for the umbrella manufacturers of the world. In the United States alone, it is estimated that over 33 million are sold annually and that the average household owns 3.8 umbrellas. Those stats would likely be much higher in a country like the United Kingdom that is notorious for having a damp climate.

Despite this demand, umbrella design hasn’t changed much in the last thousand years. Materials have evolved (most umbrellas are no longer made of paper) and more compact, purse-friendly designs have been introduced. Still, there has been very little innovation in terms of making the umbrella impervious to its biggest foe, the wind.

In 2007, “out of pure frustration with traditional umbrellas”, a university student named Gerwin Hoogendoorn was studying industrial design in the Netherlands when he invented the Senz. This new umbrella is similar in shape to a bike racing helmet and is meant to be flexible and adapt and shift in the wind. According to the website is can withstand gales of up to 100 km per hour, which seems to be backed up by the ridiculous number of awards they’ve won including the 2008 International Design of Excellence, Times Best Innovation of 2007 and the Red Dot Design Award 2007. They also reinforce their claims up with some ridiculous videos of people testing out the Senz by doing things like wake boarding while holding onto one.

The Senz isn’t available in UK shops but can be purchased online from the Senz site for almost €50 each plus about ten extra for shipping and handling – very high considering that a cheap umbrella can be bought on nearly every corner in London for under £5. The price is obviously justified by the higher quality and durability, but does it come with a tracking device in case I leave it on the Tube?

According to Duffy Bersinky, the 83-year-old owner of the Sundown Drive-in near Saskatoon, Saskatchewan, Canada, the summer of 2009 was his best year for business in well over a decade. This is despite the fact that earlier in the year he tried to sell the business because no one seemed interested in going to the drive-in anymore.

The first drive-in movie theater was opened by a man named Hollingshead in New Jersey on June 6, 1933. As the car industry in America continued to take off and most middle-class nuclear families had at least one vehicle (and usually multiple children who could be seen as a disturbance in a regular movie theater), the drive-in’s popularity continued to rise throughout the 50s and 60s.

From those decidedly humble beginnings, a U.S. institution was born, one that exploded in the post–World War II automobile culture. The drive-in era peaked in 1958, with nearly 5,000 theaters across the U.S. But in 1966, daylight saving time led to summer showings at 9 p.m., making the screenings less appealing to families. Air-conditioned theaters trumped steamy summer nights, and by the 1980s, the VCR and cable TV dealt another blow to the ailing industry. By 1995, fewer than 500 drive-ins were left. (Open Air Cinema)

Despite this slow death, the outdoor theater is coming back into vogue, though the automobile is increasingly a less central part of the experience. The popular DIY or guerilla drive-in seems to be as much about reclaiming space for political reasons as the desire to watch a film under the stars. This kind of community activity is made possible as the technology to mount a temporary outdoor movie space is increasingly affordable, available and made more appealing as individuals continue to reject spending a fortune to see tepid Hollywood blockbusters in multiplex cinemas.

It won’t help Duffy Belinsky, but MobMov has written up a how-to that will teach you everything you need to know about making your own guerilla mobile theatre from scratch.

Monsters are a part of our psychological life. In childhood we are afraid of them and as adults we turn our enemies into them (axis of evil, anyone?). Recently, Spike Jonze took on the monsters of childhood in his film Where the Wild Thing Are, based on the North American classic by Maurice Sendack. Although the monsters in the book are initially fearsome, Sendack empowers his little readers when the protagonist Max stares bravely into their yellow eyes, conquers them and becomes the king of the Wild Things.

During the last decade or so, our perception of monsters has gradually shifted. Instead of being something to fear or kill, they are also, in some cases, something we covet, that we want to become. The Twilight Series is a good example of this (though it’s preceded by the Anne Rice Vampire Chronicles, Angel from Buffy and others). Vampires, which are traditionally regarded as disgusting, rotting, flesh-eating villains, are now the dream date of young girls world wide. Instead of seeing them as monsters, cloaked in the bodies of beautiful boys and girls, we see them as not so bad; just a little bit misunderstood.

In a recent book published by Oxford University Press, Stephen Asma examines our history with monsters, chronicling the encounters that have happened across recorded history and delving into their psychology – why we create them and what purpose they serve:

Monsters embody our deepest anxieties and vulnerabilities, Asma argues, but they also symbolize the mysterious and incoherent territory just beyond the safe enclosures of rational thought. Exploring philosophical treatises, theological tracts, newspapers, pamphlets, films, scientific notebooks, and novels, Asma unpacks traditional monster stories for the clues they offer about the inner logic of an era’s fears and fascinations. In doing so, he illuminates the many ways monsters have become repositories for those human qualities that must be repudiated, externalized, and defeated. (source)

I would love to know how the world’s love affair with Twilight fits into this psychology.