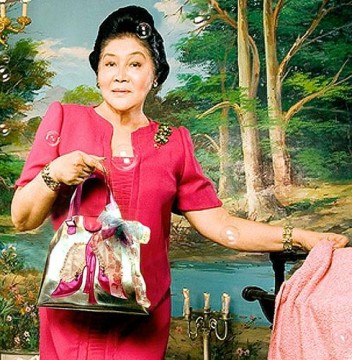 Recently David Byrne announced a new collaboration with Fat Boy Slim called Here Lies Love inspired by the ‘steel butterfly’, Imelda Marcos. The collection, set to be released in February 2010 presents Marcos “meditating on events in her life, from her childhood spent in poverty and her rise to power to her ultimate departure from the palace. In particular, the production looks at the relationship between Imelda and a servant from her childhood, Estrella Cumpas, who appeared at key moments in Imelda’s life.” (source)

Marcos was the first lady of the Philippines in the late 1960s. One of the most hated women in politics in the last half century, she was appointed various powerful positions in her husband’s government after he declared martial law and abolished the constitution, allegedly squandering away money belonging to the people of the Philippines to buy property in New York, fur coats and shoes.

Marcos was criticized for spending hundreds of millions of dollars on high-profile infrastructure projects that did little to alleviate poverty and were beyond the reach of ordinary Filipinos … By 1985, it was estimated that the Philippine government had acquired more than $28 billion in foreign loans, much of it during President Marcos’ 20-year rule… On March 10, 2008, [Marcos was] acquitted of 32 counts of dollar salting (involving £430m in Swiss bank accounts) due to reasonable doubt. Marcos stated: “First of all, I am so happy and I thank the Lord that the 32 cases have been dismissed by the regional court here in Manila. This will subtract from the 9001 cases that were filed against the Marcoses.” Her lawyer Robert Sison said that she has 10 pending criminal cases remaining… (source)

Why Marcos? According to Byrne, “The story I am interested in is about asking what drives a powerful person—what makes them tick? How do they make and then remake themselves? I thought to myself, wouldn’t it be great if—as this piece would be principally composed of clubby dance music—one could experience it in a club setting? Could one bring a ‘story’ and a kind of theater to the disco? Was that possible? If so, wouldn’t that be amazing!”