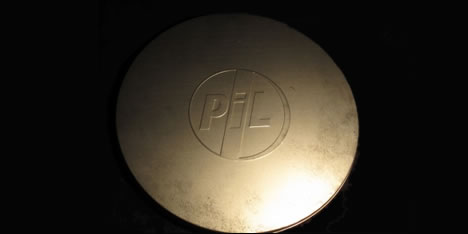 It’s a good opportunity to reappraise the band’s seminal 1979 album Metal Box. It’s a landmark record for all kinds of reasons.

Obviously there’s the music itself. It puts the disco into discontent.

Like anything described as “ahead of its time” it is, in truth, a direct influence for later artists. It’s the source of a throb and pulse which goes through a surprising amount of music which follows it. (For instance, listen to the tune Death Disco with bands such as LCD Soundsystem in mind, or for that matter certain other bands on DFA Records.) I’d hesitate to call it “experimental”, that might put you off. Let’s just say that, unlike most things which carry that word, it’s in no way an artistic dead-end.

Metal Box dates from a time when ALL recorded music had tangible packaging. And wow, what packaging.

Even though these were the days when physical media had a hope of being sustainable, this was a brave move. Virgin Records (at that time a maverick independent label) released it in the UK as three separate vinyl records in a metal film canister, hence the title. The whole thing has a heightened sound quality. Six sides in total playing at 45rpm certainly did justice to Jah Wobble’s cavernous basslines, as well as each scraping guitar sound and every shriek and wail from Lydon.

Once you managed to prise the thing open, that is.

Metal Box, in its original form, celebrates the awkwardness and clumsiness of the vinyl format. You can’t listen to it on your morning jog, nor your daily commute on the train.

Listening to it is a fully engaged activity. You can’t even do things around the house because the need to flip it over or change the record will keep interrupting you.

Although not too difficult to track down, it’s a cherished item for record collectors. (Overheard: “I just scored an original Metal Box on eBay!”, “Cool. How oxidised is yours?”)

Since the original, there have been several ways to listen to Metal Box.

For the USA version, the track list was rearranged and remastered it on to just two records in a cardboard sleeve. This made it look like any other album. Sound quality also suffered.

Then in the compact disc era, we were treated to a single CD housed in a little version of the metal box. Cute. But that’s not really a word you use when discussing anything associated with John Lydon.

At some point in recent years it made an appearance on iTunes. (And DRM was probably not the kind of contempt-for-audience the band originally had in mind.)

Now we can dip into it on Spotify, the licensed free music streaming service, adverts and all.

Often the music formats debate can come down to which is the more convenient. CD or vinyl? Or digital files? No question, digital is ALWAYS more convenient. But so is looking at the Wikipedia page for any given work of art, when compared to actually visiting a gallery.

The original version of Metal Box is a perfect marriage of content and packaging.

And who said content and packaging were even separate things?

View posts by Carl Morris
Carl Morris is one day older than MTV. His personal blog is called Quixotic Quisling. He is based in Cardiff, Wales. He wrote this biography himself, using the third person.