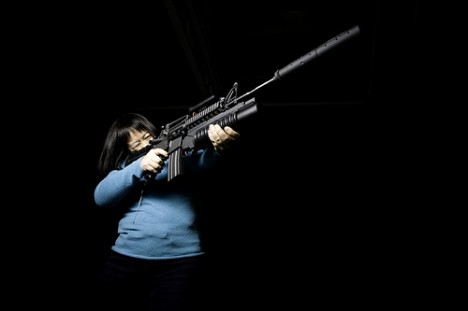 The February 2010 issue of Vanity Fair has a great profile on a US military sniper called The Distant Executioner. Although the piece focuses on one man in particular, it delves into the politics and psychology of killing the enemy by sniper fire as opposed to killing at close range during combat.

In 1947 an army general and historian named S.L.A Marshall conducted a study and extensive survey that uncovered that “up to 85 percent of frontline American riflemen had not fired their weapons in combat – even when under attack and at risk of being overrun.”

He attributed low firing rates to an instinctive aversion to killing at close range, when the potential victim is clearly identifiable as another human being. At the vital moment, Marshall wrote, the rifleman becomes a conscientious objector… Numerous independent studies have since found similarly low firing rates among Japanese and German riflemen, as well as among the frontline soldiers of World War I, the American Civil War, and several other conflicts. For whatever reason, the Pentagon took Marshall on faith and initiated a decades-long human improvement campaign. By the Korean War in the 1950s, surveys showed that fully half the frontline riflemen who saw the enemy fired their weapons in response. In Vietnam, the number rose to 90 percent … Of course, to fire at someone is by no means to hit him. The 90 percent figure was undermined by a significant number of intentional misses, and it was inflated by a battle doctrine called ‘Quick Kill’, which taught American soldiers to spray masses of automatic fire rather than take careful aim. As a result of that doctrine, in Vietnam U.S. infantrymen fired 50,000 rounds of ammunition for each kill they made – a ratio that would have encouraged even conscientious objectors to go ahead and shoot.

This all leads up to the discussion on snipers, also referred to as ‘Murder Inc.’. In comparison, snipers with their advantage of being able to kill from a distance expended only 1.39 rounds for every Vietnamese killed.