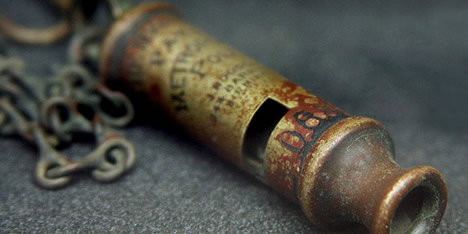 Joseph Hudson set up a whistle factory in Birmingham, England in 1870. Around 1878, his Acme whistles were the first to replace the handkerchiefs and sticks of football referees.

In 1883 the Home Secretary invited competition from companies to replace the hand rattle that the London Metropolitan Police of the time relied on. Joseph Hudson, basing a new whistle on the sound he had heard when a violin broke from a fall, was awarded the contract for over 7,000 whistles. During testing on Clapham Common, the sound of the whistle was heard over a mile away.

In 1884, the company continued their whistle revolution, inventing the first reliable pea-whistle, the Acme Thunderer, which is still the most popular whistle today and has sold in the hundreds of millions.