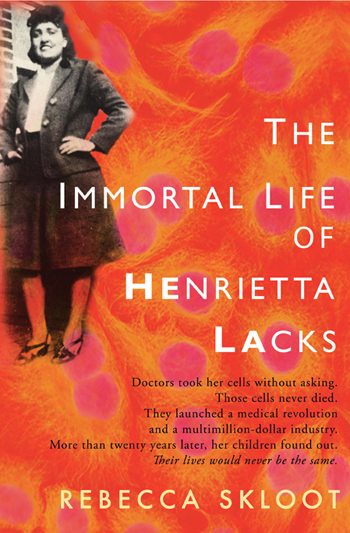 For months, the world has watched eagerly as Obama has tried to navigate the juggernaut of health care reform in the United States. I’m from Canada and I currently live in the United Kingdom, both countries with a long and ardent history of public health care. Maybe that’s why I don’t understand how such a great number of people can be so opposed to the idea that everyone deserves to be able to see a doctor when they are unwell. As recently as today, the Senate is giving no indication of when the watered down Plan B will be passed or when millions of uninsured American citizens can expect some support from their government.

In light of all that is going on with health care reform, Rebecca Skloot‘s book The Immortal Life of Henrietta Lacks becomes all the more poignant, relevant and sad. It’s the true story of a woman who has been largely ignored by the people who write history, despite her involuntary but undeniably great contribution to science over the last century. The reasons for her omission are complex, and no doubt begins and ends with the fact that she was a “poor and largely illiterate Virginia tobacco farmer, the great-great-granddaughter of slaves. Born in 1920, she died from an aggressive cervical cancer at 31, leaving behind five children. No obituaries of Mrs. Lacks appeared in newspapers. She was buried in an unmarked grave.” (source) Her cancer was extremely aggressive and at some point, without her knowledge or consent or that of her family, cells (now called HeLa cells by scientists) were taken from her diseased cervix and have been used as the basis for medical invention for decades.

There are … “trillions more of her cells growing in laboratories now than there ever were in her body.” Laid end to end, the world’s HeLa cells would today wrap around the earth three times. Because HeLa cells reproduced with what the author calls a “mythological intensity,” they could be used in test after test. “They helped with some of the most important advances in medicine: the polio vaccine, chemotherapy, cloning, gene mapping, in vitro fertilization” … HeLa cells were used to learn how nuclear bombs affect humans, and to study herpes, leukemia, Parkinson’s disease and AIDS. They were sent up in the first space missions, to see what becomes of human cells in zero gravity. (source)

The only reason anyone knows about Henrietta Lacks’s contribution is because, decades after her death, doctors began to take blood samples from her surviving relatives to be able to better understand and study HeLa cells. Today, many of her relatives are living in Baltimore and, like Lacks herself did, they struggle to get by. Despite this, they are luckier than Lacks’s daughter who was institutionalised in what must have been a hellish facility – The Hospital for the Negro Insane – where she died at the age of 15. The story defies imagination and inspires disbelief, followed by a combination of anger and horror. According to Skloot’s research, the medical tradition has a long history of experimenting on African Americans in the name of science.

What does this have to do with health care reform?

Says one of Henrietta Lacks surviving sons, “She’s the most important person in the world, and her family is living in poverty. If our mother was so important to science, why can’t we get health insurance?”