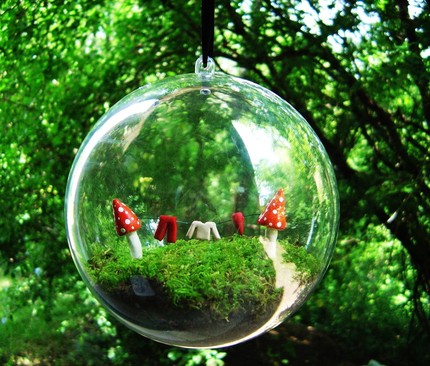 Although it is arguable whether they were ever really ‘in’, the terrarium is making a resurgence. Not only does it seem to have situated itself in the same quasi-hipster cool category as knitting (think stich ‘n bitch) and dissenting cross stich patterns, it can also be ever so practical for people living in big cities with limited outdoor space. Also important, people are starting to make really cool and beautiful terrariums.

A terrarium is traditionally a glass container that is completely enclosed (like an old preserve jar), which is built to act like a mini-greenhouse. A drainage system is installed at the bottom of the jar in the form of gravel or rocks, that is covered in some rich soil where small succulents are planted, along with other more decorative elements like moss or little figurines (such as the one above, which is from Doodlebirdie’s Etsy shop). Basically, the terrarium creates a perfectly climatised little home for small plants – all you need to do is add water once in awhile.

Although some sites date the terrarium back to ancient Greece, most agree that it was a UK-based invention:

In 1831, when British surgeon Nathaniel Ward picked a fern, stuck it in a bottle and forgot about it. Several months later, the fern was thriving and grass had sprouted in the enclosed container – without any cultivation or watering from Ward. Twenty years later, Ward’s enclosed biosphere was put on display at the 1851 World’s Fair in London, and so-called Wardian cases became a fad. The inspiration for the Victorians may still be what draws us to terrariums today. (source)

There are lots of online tutorials for making your own terrarium if you are so inclined. In the meantime, here are some beautiful examples for inspiration: 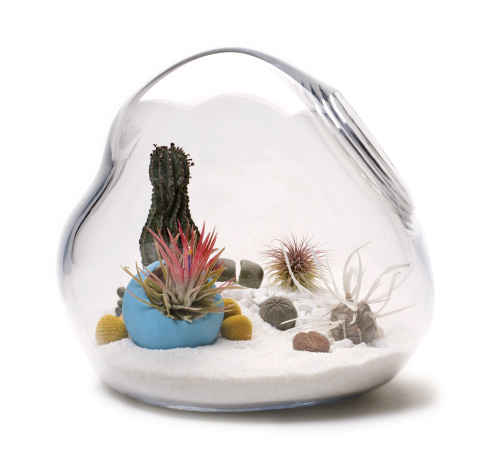 Above Image and Terrarium by Litill. 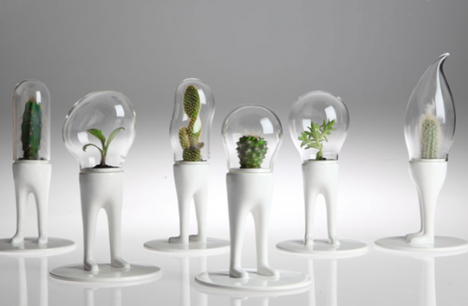 Above terrariums by Matteo Cibic.