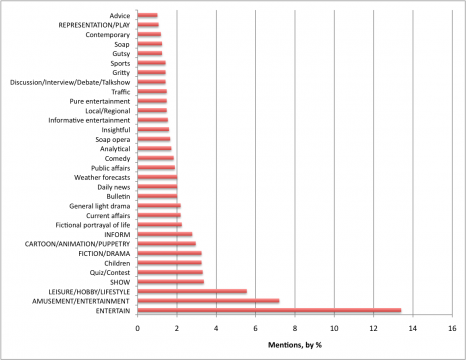 The BBC make the data available for their TV and Radio output. The graph above summarises the type of output you’d be exposed to by watching BBC1-4 for the 7 days that started on 5 February, 2010. There are many more categories mentioned in the data; the graph only includes categories that make up 1% or more of the output.

We have to conclude that the BBC know what the people want, and this reflects our needs. We want more soap opera than insight, more quizzes than programmes that inform, and more sports than advice. A cynic might suggest that this is a poor reflection on modern society, yet it more likely points to the main use of the TV medium, as an easy escape at the end of a stressful day. 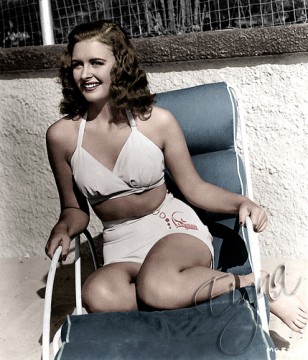 Donna Reed was a beautiful American actress who was probably best known for her role as Mary Bailey, the long suffering wife of George in It’s a Wonderful Life. During World War II, she became a very popular pin-up for soldiers overseas – she visited army bases overseas a number of times and corresponded regularly with soldiers on active duty. Although her daughter said she never spoke of the letters she received, when she passed away of cancer in 1986 at age 64, her family found hundreds of these letters stored in her attic:

All told, Ms. Reed held on to 341 letters, some typed but many written in the kind of elegant … method cursive script rarely seen today. Taken as a whole, the correspondence offers a candid glimpse of a vanished era, a time when six hard-bitten Marine sergeants could write that “we think you’re swell” and mean it in something other than an ironic sense … Gauging the impact that the letters had on Ms. Reed is difficult. “I knew she had feelings about her country and participating as a concerned citizen,” Ms. Owen said. But, she added, her mother did not talk about the letters. Ms. Reed lamented to a female pen pal in 1942 that “my effort to win the war hasn’t amounted to much” and “I wish I could find more to do.” (source)

Later in life, and perhaps because of the impact the war and these soldiers in particular had on her, Reed became active in the anti-war movement as a prominent member of the group Another Mother for Peace (AMP). The group is still very active active and shares information such as the recent United Nations report Silence is Violence, End the Abuse of Women in Afghanistan (PDF), encouraging members to act speak, write and act out to encourage peace.

AMP’s Pax Mantra has been a cornerstone for women protesting against war in the United States for decades, including when Reed was a member. This simple, but powerful statement ends, “they shall not send my son to fight another mother’s son. For now, forever, there is no mother who is enemy to another mother.” 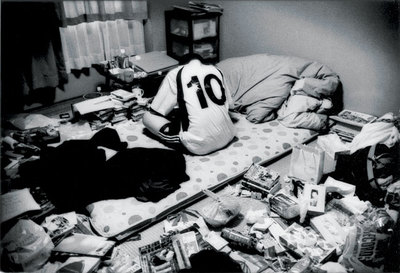 The death of writer J.D. Salinger last week renewed the public’s interest in his reclusive life-style. According to most accounts, Salinger lived a fairly conventional life until after the publication of his most well-known work The Catcher in the Rye – some claim that he actively sought fame and success until he found it and, with no explanation, retreated. He’s in the good company of other famous recluses including: Harper Lee, Lauryn Hill and Bobby Fischer.

Perhaps because the very nature of anti-social behaviour is a closing off from society, it remains something that very few people understand, including those in the medical community. In recent years, pathologically reclusive behaviour has become such a phenomenon in Japan that it has been given its own name: hikikomori. Although his figures are disputed, psychologist Tamaki Saito has estimated that “there may be one million hikikomori in Japan, representing 20% of all male adolescents in Japan, or 1% of the total Japanese population.” According to a fascinating profile of hikikomori in the New York Times, “though female hikikomori exist and may be under counted, experts estimate that about 80 percent of the hikikomori are male, some as young as 13 or 14 and some who live in their rooms for 15 years or more.”

Unlike most of the young hikikomori of Japan, Salinger did seem to reach out to people – he was married a number of times and had two children. Time and again, these relationships tended to be fraught and often ended abruptly. Salinger’s daughter Margaret published a memoir about him and wrote, “His search . . . led him increasingly to relations in two dimensions: with his fictional Glass family, or with living ‘pen pals’ he met in letters, which lasted until meeting in person when the three-dimensional, flesh-and-blood presence of them would, with the inevitability of watching a classic tragedy unfold, invariably sow the seeds of the relationship’s undoing.”

J.D. Salinger’s version of events? “You can’t ever find a place that’s nice and peaceful, because there isn’t any. You may think there is, but once you get there, when you’re not looking, somebody’ll sneak up and write “Fuck you” right under your nose.” (source)