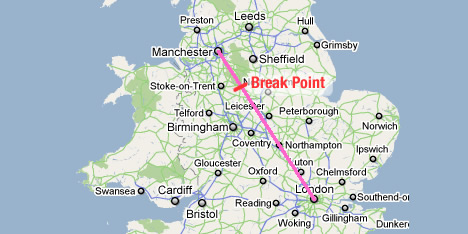 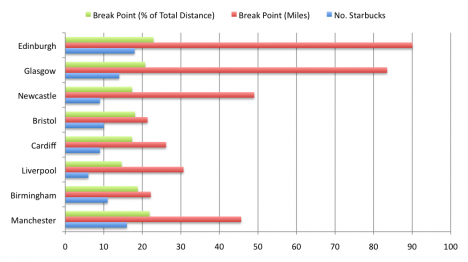 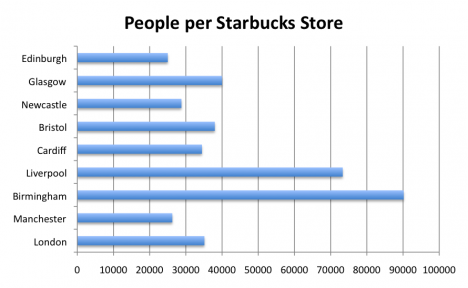 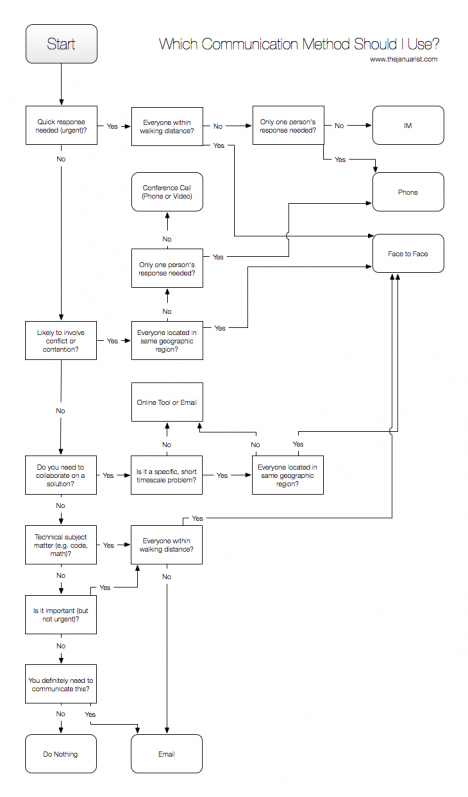 the image above for the full-size flowchart. This is a draft attempt to document the best communication method/channel for various situations (face to face, email, phone, instant messenger/skype, or conference call). Please add your thoughts and suggestions to this post, and we’ll update the flow chart accordingly. 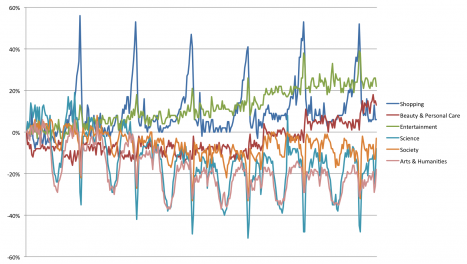 The Google Insights For Search tool provides one method for tracking changes to our culture and priorities. The graph above (click for a larger version) shows the change in volume of global searches for six different categories of query, from 2004 to 2010. Changes are relative to the search volume for each category in 2004, i.e. each category starts at 0% change on the left.

To draw any specific conclusions from such generic data would be foolish. However, a pessimist might suggest that this highlights a dumbing-down of society, where we increasingly turn to commercialism and celebrities to fill our time. An optimist might suggest that this data shows how the web has successfully evolved from a limited academic tool in the richest countries to a widespread media that a broad range of people rely on.

The only hard conclusion I’m taking from this is: now’s the time to invest in online beauty companies. 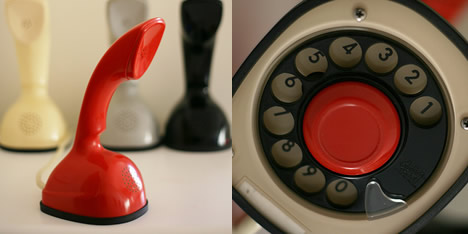 1954, by Blomberg, Lysell and Thames. Made from ABS plastic. Typical eBay price: from £50.

The “Cobra”, nicknamed after its shape, was the first one-piece telephone. More than just a design gimmick, the innovative ergonomics ensured it was initially a success in hospitals and other environments where peoples’ movement was restricted.

Originally available in 18 colours, the phone also featured one of the first transistor buzzers, giving it a distinctive chirping sound rather than a traditional telephone bell ring.

The button on the base of the telephone depressed as the phone was placed down, hanging up the call. When the phone is picked up, the button is released, picking up the receiver: cleverly building automated functionality into the intended physical use of the object. 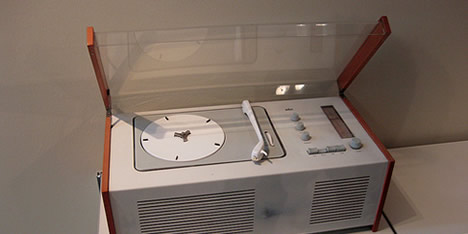 Like the Ericofon, which was co-designed by a non-designer (Thames was an engineer), the SK4 was co-designed by an architect, Dieter Rams. Originally designed to be a low-cost entertainment unit, the clever use of modern materials and minimal design ensured that the Sk4 – also known as Snow White’s Coffin – would become a design classic.

The use of sheet steel allowed a single layer to be wrapped around the front, top, and back, with the electrical components inserted from the bottom. This clever design removed the unsightly wiring normally found at the back of the unit, allowing an entertainment system to be positioned in the centre of the room as ‘furniture’ for perhaps the first time.

Standard record players of the time had a wooden or other solid cover that hid the complexities of the turntable when not in use. Although sheet steel was first considered for the SK4 lid, the design team found that it had a negative effect on the quality of the sound. So, for the first time, a transparent perspex lid was used, displaying the beautifully arranged controls in all their glory. This design decision was quickly adopted by other manufacturers. 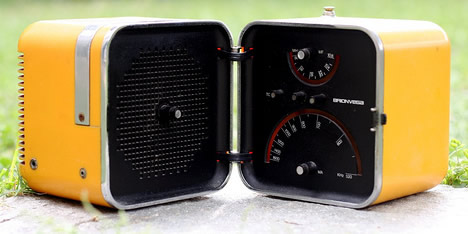 The design duo Zanuso (another architect) and Sapper created many stunning objects, including the first

This stunning radio, measuring about 10 inches tall, folded into a cube and featured a slide-out carrying handle. Dubbed in the marketing materials as “the protagonist of its environment”, the unusual design ensured that people took notice wherever it was placed.

Still available with the same design today, 45 years later, the TS-502 proves that “classic” design is anything but classic: rather than creating something in-keeping with the style of the times, truly “classic” designs are those that break the mould. 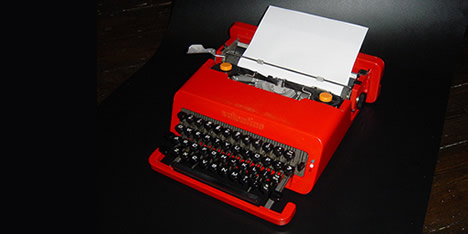 Designed by yet another architect, the Italian Ettore Sottsass set out to create the “anti-machine machine”, in what could be see as the predecessor of the iBook and other Apple products that introduced office objects to the home.

Sottsass described his creation as “a biro among typewriters”, and later as “too obvious, a bit like a girl wearing a very short skirt and too much make-up”. Even so, his simply designed colourful typewriter became popular with many a budding poet and author, and was supported by a marketing campaign with art from Milton Glaser (of “I ♥ New York” fame).

In an attempt to simplify the typewriter as much as possible, it is rumoured that an early prototype of the Valentine only had a single case of letters (i.e. could not switch between upper and lower case), perhaps predicting the informality of modern-day SMS and email messages.

Olivetti are the only company that still manufacture manual typewriters. 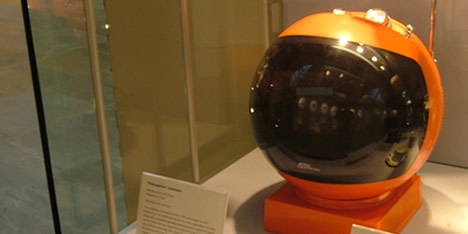 Clearly influenced by the space race of its time, the Videosphere seems to embrace every constraint of the technology, and then adds a few more unnecessary ones for the heck of it.

An 8″, black and white television, the videosphere housing accentuates the curved tube screen, and adds unreachable controls at the top/back, together with a chain for hanging the TV from the ceiling.

A stunning, classic object that demonstrates how great design sometimes wins over functionality (though I’m not sure I’d actually like to watch anything on it). 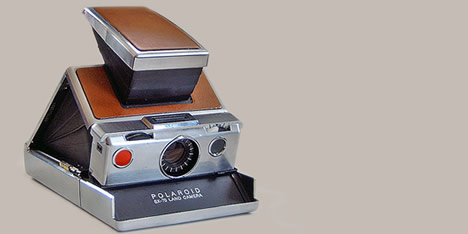 1972, by Dreyfuss. Made from chromium-plated plastic. Typical eBay price: from £40.

The great Henry Dreyfuss, originally a theatrical designer, was asked to design the first camera to use Polaroid instant film.

Not only was it the first camera to use instant film, it was the first folding SLR camera.

And not only was it the first folding SLR camera, it was (in a later model) the first auto-focus SLR camera.

A stunning piece of engineering and design, the folding camera was designed to fit in a “gentleman’s pocket”. It rightly won many admirers: Andy Warhol was a fan, Charles and Ray Eames made a short film about it, and Laurence Olivier gave his only product endorsement to it. 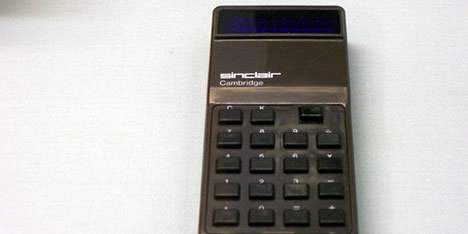 The Apple-esque minimalism on the outside was unfortunately not matched by equally stunning design on the inside. Although the prototype was built with standard gold-flashed nickel contacts on the switch, the production models used a cheaper tin-coated nickel. Switching the calculator on and off a few times smeared the oxidised tin across the contacts of the switch, quickly turning the calculator into an always-on version. 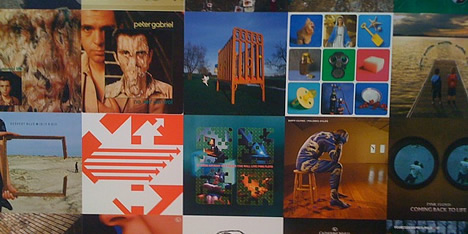 Storm Thorgerson is a British designer and artist responsible for more classic album covers than you can possibly imagine one person could create in a lifetime. From Pink Floyd to Audioslave, The Cranberries to Muse, he has produced the most compelling and memorable album artworks of the last 40 years.

An excellent exhibition of his artwork runs in the east-London Idea Generation Gallery from April 2nd to May 2nd, 2010. Part of the exhibition highlights his creative process for a specific case study. Check out the exhibition yourself to see the process in action and in detail. For now, here’s a quick overview:

Written down like this, the process seems so simple. When you consider that some ideas involve 700 or 800 iron beds arranged on a beach with the tide approaching, you begin to appreciate that it might not be so simple after all.