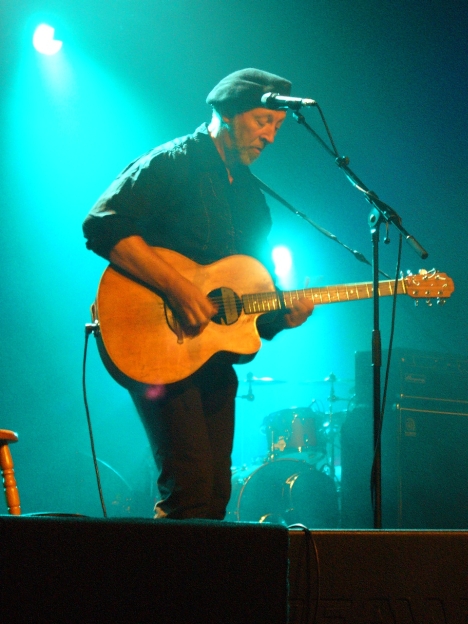 Richard Thompson is a solo musician and former guitarist in the folk rock group Fairport Convention.

When Playboy magazine blithely asked him to list his favourite songs of the last “millennium”, Thompson drew on his formidable knowledge of music to do exactly that.

The resulting list, spanning the years 1068 to 2001, was deemed unsuitable by magazine staff who decided to run more editorially viable charts by other personalities instead.

Nevertheless it gave Thompson a unique concept for a show – and album release. Live or on record, Thompson offers performances of one of the oldest known songs in the English language Sumer Is Icumen In, the Gilbert and Sullivan penned There is Beauty In the Bellow of the Blast and among other more contemporary songs Oops!…I Did It Again, originally performed by Britney Spears.

Despite the diversity, he admits to gaps in his coverage of the 17th and 18th centuries and “too much weight on Music Hall and Rock & Roll”.

Thompson’s background is in the folk tradition. In its original sense folk music happens in a live setting – songs are memorised, passed on and adapted, sometimes for hundreds of years. Often in our culture “folk” music has become a byword for a certain style of acoustic guitar music. But it originally signified a word-of-mouth community where ideas of authorship, strict copyright and “original” versions were secondary or non-existent. With that knowledge maybe it’s less of a surprise that Richard Thompson is a walking archive of songs ready to be shared, a commons if you will.

View posts by Carl Morris
Carl Morris is one day older than MTV. His personal blog is called Quixotic Quisling. He is based in Cardiff, Wales. He wrote this biography himself, using the third person.